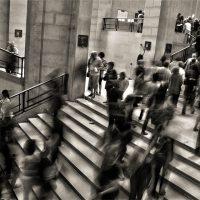 By Alex Watt on January 16, 2017 in Computer Science, Research

Crowds are curious things. As I have navigated many in airports, train stations, and other public places in France this semester, I’ve been surprised at how a path through the crowd that my friend took ahead of me, a few seconds ago, is not necessarily the path I should take. People are moving constantly and I need to keep moving as well if I do not want to lose my guide.

Dr. Cory Boatright, Assistant Professor of Computer Science at Grove City College, has done research on crowd simulation since 2011. Crowd simulations are usually of pedestrians, and are defined by giving hundreds or thousands of virtual agents a starting position and a destination. When the simulation starts, individuals begin to make their way through the ever-changing crowd. While visualization is not required, it is helpful for understanding. Below is a screenshot from Dr. Boatright’s work:

While working on his Ph.D., Dr. Boatright’s research focused on using a data-driven approach to crowd simulation, instead of a procedural or geometrical take, with the intent of making the simulation faster. This past summer, two Grove City students worked on updating the framework used for the simulation. When that project is completed, it will be easier to set up simulations to research other things.

“The nifty thing about crowd simulation,” Dr. Boatright noted, “is that it crosses a lot of fields — everything from massively parallel computing to law enforcement.” One interesting application explored in a paper [1] is using software to process a video feed of a crowd, update a live model of the crowd, and predict destinations of pedestrians. The software could then flag unusual behavior, like someone in a lobby who has been wondering about and is not taking a direct path anywhere.

A second research interest for Dr. Boatright is vectorizing raster graphics. A raster image is essentially defined by a grid of pixels, where every pixel has a defined color. Photos, for instance, are raster images. A vector image, on the other hand, uses shapes or paths to define what is seen. Thus a vector image has infinite resolution. Vector graphics are generally used in design, while raster graphics are used for photos.

So when might one want to vectorize a raster image? Boatright referenced Wendell August Forge, which often makes ornaments based on photos provided by customers. This requires an artist to take the photo and trace the important paths in a vector format. If this task could be completed with software, it would save a lot of time.

Boatright has always been interested in large-scale problems and squeezing as much performance as possible out of a computer. Although crowd simulations and IBM’s Watson do very different things, Boatright’s simulation can handle thousands of virtual agents on his personal PC, while Watson fills a room.

Anyone interested in computer science will find that GCC professors, like Dr. Boatright, have a wealth of interesting research to draw on — and some of the research areas present opportunities for students to get involved.

Alex is a junior studying Electrical Engineering with a Computer Concentration. In his spare time, he enjoys making music on the piano and the guitar, reading a good book, coding, and always a good meal with friends.
View all posts by Alex Watt →
Thankful for Thanksgiving Break
Internship Spotlight: Abigail Cunningham