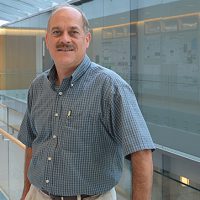 If you walk past the gym at lunch time on any given day of the week, you will probably see a collection of middle-aged-looking professors running around, playing basketball in the infamous “faculty basketball lunch league.” Included among this motley crew is their fearless commissioner, Dr. Joseph Augspurger. When he is not breaking ankles and taking names, he spends his time being the chair of the Department of Chemistry at Grove City College. I had the opportunity to interview him and learn more about his life, as well as his time at Grove City.

After growing up on a farm outside a small town, “much smaller than Grove City,” in central Illinois, a young Dr. Augspurger traveled to the University of Illinois (Champaign) to complete his undergraduate degree in chemical engineering. He would eventually return to receive his Ph.D. in physical chemistry, and he would then travel to Cornell University for his post-doctoral work. In 1996, after living in five states during 11 years of marriage, he came to Grove City College to become a professor.

During his 22 years here at the College, Dr. Augspurger has seen a lot. He has seen the transition from Rockwell Hall of Science to the new Science Technology Engineering and Math building, he has seen life as both a regular professor and a department chair, he has seen his children grow up and come to college here at Grove City, but most of all, he has seen a lot of students through their time in the chemistry department. He recounted to me many stories of alumni who have gone off into wildly different directions with their chemistry degrees, all of whom have found success in the fields they have chosen (including at least 70 students who have obtained Ph.D.’s). The most interesting thing he noted was how he has seen two students get their degrees in biochemistry at Grove City and end up getting their Ph.D.’s in biology and returning to Grove City as biology professors.

Although there are countless other institutions of higher education that could both provide him a career and students an education, Dr. Augspurger believes Grove City is the place to be. He highlighted the quality of both the faculty and the students he has encountered over his time here, noting that “we attract strong students” and that the chemistry department has “always had a good department,” which makes his job much more enjoyable and fruitful. He also noted the resources and equipment in place at the College, which are outstanding for a school this size. Something he placed special emphasis on was the community and relational aspect of the department. He talked about the cohesion that exists between students in their classes and labs, and the extra interaction that exists between students and professors since it is a relatively small school. “I think we’ve got a lot to offer people that come this way…if somebody wants to make this succeed, I think we will do whatever it takes to try to make it possible.”

On a more personal note, I can attest to the work Dr. Augspurger does at the school for students. I had him for a class, and during that time he stood out to me as one of the top professors I have had. Although it was only a two-week class for non-science majors, he took the time to learn my name, and get to know me. He was thrilled to be able to open our eyes to science that we had never encountered before, and he wanted to do whatever he could to give us a positive experience. The work he does is exceptional, and everyone who encounters him will soon learn that.

Emily is a sophomore Accounting & Business Management major at Grove City. She hails from the Pittsburgh area, is the youngest of three siblings, and the owner of two cats. When she doesn't have her head buried in a book, she can be found listening to music, enjoying food, or hanging out with her friends (or all 3 at once).
View all posts by Emily Stein →
Faculty Spotlight: Dr. Kimberly Miller
“Victory” in Finding a Church: A Closer Look at Victory Family Church