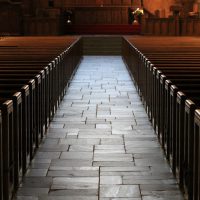 What do seniors in high school and a junior accounting major from Grove City College have in common? Well yes, neither is going to have to take the annoying and stressful ACT /SAT tests again… But besides that, I was thinking more along the lines that neither really knows what they want to do with their future. I can say this speaking from self-experience and observing others. It may sound cliché, but no one knows what they truly want to do with their future, and if you do not believe me ask your parents. My father has worked at the same location for the past 27 years and he comes home most days saying he does not know what he wants to do with his life. So how did we go from having a title about switching majors to this tangent about how most people do not know what they want to do with their lives? I choose to take this route because this is my current position and this lack of knowing has not only inspired me to try new things throughout my time here at Grove City College but to also have faith, so let me elaborate.

My freshman year of college I came in as a chemistry major. Seems like a good idea right? For some people this may be the perfect fit for them but for me… not so much. In choosing to go to college I had no idea what I wanted to be and in a somewhat hap hazardous way decided that since I took a year of chemistry in high school and liked it that I would go to college and become a… who knows. Throughout my first semester I was pushed and stretched mentally and the 16 credits of chemistry, physics, calculus, biblical revelations, and fitness and wellness really threw me for a loop. I was constantly working to keep up and knew that I was a chemistry major but had absolutely no clue why. A major shifting point for me was when I attended the Grove City College annual Career Fair and immediately became aware that I had no desire to do any of the jobs that an individual with a chemistry major would be equipped to do. I still remember that day vividly. I left the Career Fair freaking out wondering what I had gotten myself into. I was working harder and studying more than I had ever studied before and had no desire to be doing anything in the field of chemistry. So, I ran (literally) to my room from the Career Fair and called my parents, on the verge of tears, telling them I was ruined. I had made the biggest mistake of my life, but what I didn’t know was that this was just part of a bigger plan.

After the long phone call with my parents I decided that chemistry was not the major for me and no matter the implications of changing majors I was going to switch, but to what? I had people suggest various majors to me but what I felt in that moment drawn to (see this common trend of me making these big “in the moment” decisions to decide my future) business management. I felt that this was the “career” for me. So, I finished out my first semester as a chemistry major and in the final weeks dropped the chemistry major and added business management.

Tobin is a Senior Accounting Major who is an active member of the Sigma Phi Omicron housing group. He enjoys playing intramural sports, fishing, going on camping trips, and just hanging out with friends and family.
View all posts by Tobin Goss →
Reel Life at Grove City College: A Chat with Dr. Schaefer, Religion Professor
Having Fun with Your Electives: ART 104