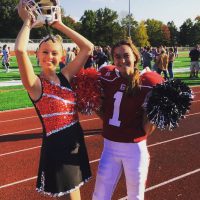 How often do you have the opportunity to watch a woman play football at the collegiate level? If you have never witnessed this, I invite you to attend a Grove City College football game at Robert E. Thorn Field this year. Pittsburgh native and senior, Kelsey Tischler, is one of the kickers for the football team, and she makes sure to never disappoint the crowd. Her love for football and the program is something very special. I had the chance to talk with Kelsey and learn more about her decision to pursue collegiate football. Here are her remarks:

At what moment did you realize you wanted to play football?

My junior year of high school, I was sitting in the student section during one of the football games, and I watched the kicker kick an extra point. I thought to myself, that would be fun. So, the next night I was at a neighborhood campfire and I told my neighbor that I wanted to kick for the football team. It was at that moment, there was a fire lit inside of me. I did not realize it then, but that was 100% the Lord giving me His plan.

How challenging is it to be the only female athlete on an all-male team?

I have been blessed with the greatest teammates, and I think it speaks so highly of who they are as men. At times there are personal challenges for myself, but the guys are all so kind to me and they make it pretty easy. Sometimes, it is weird because I look around and ask myself, what am I doing here, but there is nowhere else I would rather be than on this Grove City College football team.

Do you ever question your faith since God has created a path for you that is very different from most college females?

I think there are times when I ask myself why I am here, then I understand that God has sent me here for a reason. So, sometimes there will be moments where I question something but I always go back to the Lord and His plan for me, which I know is good and this is where I am meant to be.

The football team is coming off a great 2018 season, what are the team goals for the upcoming season?

We have had the same goal since day one when I walked in here and we were one of the worst teams in the country. It would be to glorify God in the pursuit of earning a degree, building lasting relationships and competing for PAC championships.

Which coach gives you the most inspiration on or off the field?

Coach Brest just joined the coaching staff this past year as the kicking coach and he has had a really big impact on me. Throughout my three years here, Coach DiDonato has done an incredible job, and it is hard to put it into words. I cannot believe that he is my head coach. He is the best coach anyone could ever ask for, and he incorporates winning but also character, making sure we are developing as young men and women off the field.

Can you tell us about the significance of the phrase, Brick by Brick?

This phrase means a lot to everyone on the football team. To me and a lot of the other players, it means vision, process, and love. We have a vision, our process is to keep laying bricks until it becomes a wall and love is what holds everything together. 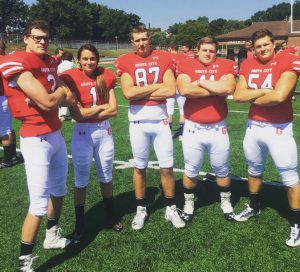 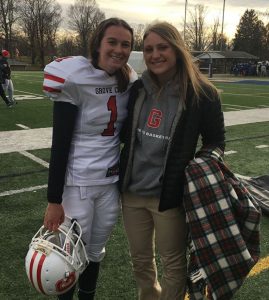