Not knowing who your roommate will be as you begin college can be a little nerve-wracking. You could be living with someone you do not know anything about, or who is from a completely different state or country, or who has completely different expectations for sleep cycles or cleanliness. It can be tough. This week I interviewed a couple of people and asked them about what their experience has been with their roommate, and asked for tips on how to deal with roommate conflict.

I started by asking how they went about dealing with roommate conflict. H replied, “Well, my roommate S normally does it for everybody else. But, one thing I noticed she does a lot is when she has a hard conversation with one of our roommates, and she says something that could be taken the wrong way, she always goes back and does something nice for them. For example, sometimes when I’ve had a tough conversation with my roommates and I felt like it went badly I will leave them a nice note and try to encourage them or make things right.”

M had a similar thought, saying, “Yeah, I think it is best to try to restore the relationship, but still be sure to deal with things. I really don’t enjoy confrontation, and I think sometimes people try to not deal with things or push it under a table, but it just does not go well.”

J thought it was good to bring up the conflict early on, saying, “You bring up the problem early before it becomes a big problem and try to talk it out respectfully.”

“So,” I asked, “Is there ever a good time to ignore problems with a roommate?”

H replied, “Don’t ignore your problems with other people, actually address them. I think people do that a lot – it’s not a very big social norm (to address problems), especially coming out of high school. People don’t deal with problems they have with others in high school. They don’t talk to people they are having problems with. Before I came, I had maybe had those types of conversations about three times. But when I first arrived I needed to have those conversations like three times within the first week of school.”

J wanted to add more clarification – “If it’s something you are sure you can deal with and it’s just irking you, but not really ruining you… If you know you can live with it, and it’s just inconvenient then you could probably ignore it.”

Continuing the thought, I asked the group, “Why do you think that is important to address problems with roommates?”

“So you’re not building up any sort of weird emotion with your roommate. You don’t want things to get stuck under a table and have it be tense in the room,” H said, with a look of remembrance on her face.

J added, “I think it’s a good thing to do early because it kind of builds up some respect between you and your roommates and it keeps it open for more conversation.”

Roommate conflict can be a tough issue when you share a small dorm space with people, but hopefully this tips help give you a hint on how to deal with roommate issue in the future. I have had some amazing roommates throughout the years, and all of them have become life-long friends. Whatever the circumstances, aim for peace. 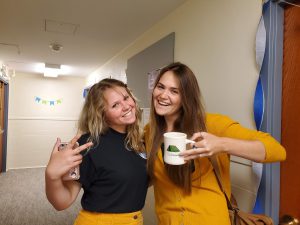