By Alex Watt on February 26, 2017 in Student Spotlights 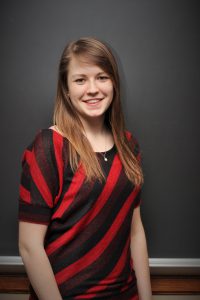 Alicia VanDerhoof is a junior English major who recently agreed to sit down for an interview. I wanted to get her perspective on Grove City College because she knows this place well and has committed herself to the community, both on and off campus, and is a generally thoughtful person as well.

For starters, I asked Alicia why she chose Grove City, and was surprised that volleyball was part of the answer. Alicia was drawn to Grove City’s focus on the liberal arts and its classical studies minor, but she cast a broad net and applied to 10 colleges. As someone who had to finance her own education, cost played an important role. But when it came down to a final decision, she couldn’t play volleyball at the other school she was considering.

What are you studying and why?

Alicia hopes to teach in a classical school, and has been involved with the local one in Grove City. She chose English because it’s a major that involves literature and reading, but also writing and understanding history — all things that would be valuable for a teacher. She is also minoring in classical education.

How is English different at Grove City College?

We live in an age of “multiculturalism” which tends to reject one’s own heritage and replace it with a misplaced desire to appreciate all cultures equally well. In Alicia’s experience, the department does a great job of studying and emphasizing the Western Canon while still appreciating good literature wherever it may be found.

As Alicia noted, “You don’t want to sacrifice the good to be relevant to all.”

What do you enjoy reading, and how has college changed that?

Alicia’s “joy reads” are still catching up on the classics — she named Jane Austen, Mark Twain, and Charles Dickens as a few favorites. But she says that classes like the 20th Century American Novel have really stretched her, since they are novels that deal with completely different questions.

She also noted the helpfulness of having a professor to guide the reading and to bring a Christian perspective. Without this, for instance, reading those 20th century works could feel quite hopeless!

And finally, Alicia has appreciated the department’s sense of charity and eagerness to see common grace in literature. All truth is God’s truth. And it is precisely because the department holds to Scripture as the standard that other works can be appreciated for their merits and measure of truthfulness.

How have you been involved in the community?

Alicia said that she loves being involved outside the classroom, on and off campus, and proceeded to make that obvious.

On campus, she is involved with Lux Mea, a student society committed to fostering the community of learning between students and faculty of all disciplines. She is also a teaching assistant, or TA (something she heartily recommends to everyone!) and films for the men’s basketball games, something that has really made her a part of their team.

Off campus, she helps with the local classical Christian school (Grove City Christian Academy), working with the first grade. She said it’s great to be out of the college bubble and doing what she loves already. She’s also involved at Grace Anglican Church, where she attends, working with K-3 students. And finally, she helps out at Paper Sky Theatre, a local venue that puts on some incredible plays.

What professors have you found most inspiring?

Dr. Edwards (History): Having read widely and thought carefully, Dr. Edwards knows where he stands and so when he lectures, he deeply challenges the way you think. He also chooses readings that contradict each other, so you’re forced to determine what you believe. Alicia says everyone should take Historical and Philosophical Foundations of Education with him!

Dr. Potter (English, and Alicia’s advisor): Alicia appreciates his humility and his thoughtfulness in his comments. He helps students become better and more charitable readers so they can become better writers as well. She also noted that he attends Grace Anglican Church as well, and it has been valuable for her to see a professor outside of academia — getting his hands dirty and worshiping Christ in community.

Dr. Graham (History): Alicia took Latin with him and learned more about history and Western civilization than she expected! He is always wanting to learn, connecting dots in surprising and insightful ways. He even goes on regular archaeological digs!

Dr. Gordon (Biblical Studies): His pastoral background is sufficiently broad that he can joke that he only needs the Bible. He is a very wise man (and has written a few books) who is also hilarious, and generous in his office hours. Alicia notes that professors here are generally eager not only to answer questions but also to get to know students.

What final advice do you have for future college students?

Alicia exudes optimism for what college can be, and says that the community of professors and students is an encouraging one to grow in faith and in knowledge. She points out that one is not excluded from learning things outside one’s major, and that college is a time to learn what you really believe because you will be challenged.

And finally, she says to get connected to a local church and be involved outside the College — both things that she clearly practices as well.

This is the first of a series of interviews I will be conducting with current students who embody what I most appreciate about the College: Amazing peers who challenge me with their example, reminding me of the words of Paul to Timothy: “Let no one despise you for your youth, but set the believers an example in speech, in conduct, in love, in faith, in purity.” (1 Timothy 4:12, ESV)

Thank you for reading, and to Alicia for taking the time to talk!

Alex is a junior studying Electrical Engineering with a Computer Concentration. In his spare time, he enjoys making music on the piano and the guitar, reading a good book, coding, and always a good meal with friends.
View all posts by Alex Watt →
Questions You Should Definitely Ask on Your Campus Tour
Being a City Boy in Rural PA: What’s Western PA All About?